Alan FitzRoland: Lord of Galloway,hereditary Constable of Scotland, and unofficial patron of the Covenant

At this time Galloway is a semi-independent state and the Lords of Galloway had traditionally maintained cautious relations with both Scotland and England, accepting the authority of one or other when circumstances dictated, and acting as a sovereign monarch of Galloway when they could get away with it. This measn that Alan has supported both soverigns during his reign.

In 1212 Alan of Galloway led a large fleet carrying an army of 1,000 men south in support of King John of England’s campaign against the Welsh. He also supplied ships and men to support King John’s campaigns in Ireland and France. In 1215, Alan was among the 16 nobles trusted by King John to advise him about his response to the Magna Carta. 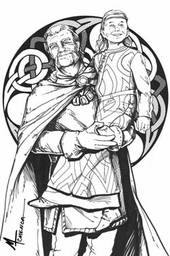