I want to thank Aaron, Nick and Patrick for making it. We missed you Adam. The magi held a council meeting to make their plans for the upcoming Tribunal. First the voted to allow Sion ex Merinita to join the Covenant. The Irish wizard had few belongings to bring with him when he was found stranded on that rock, so the members discussed what services he could perform. Looks like he plans to make the land around the covenant more bountiful and will likely be assigned a task to improve the groups brewing capabilities.

It was also decided that since Marcus did not have a vote and was the Praeco of the Querentis in Extremis, he would appear as the voice for the covenant. It was also decided that Marcus would be accompanies by Feargus because he knew lots of the Damhaim Duidsen, it would be Sion’s introduction to the rest of the Tribunal, and finally, Sophia and Francois would go to handle to politics off the stage.

The magi reviewed their vis and library to determine what they needed to try to obtain from the other covenants. Marcus also pondered the letter from Whitburh Frithowebba, ex Guernicius, the only quaesitor in Loch Leglean. It seemed to suggest a possible threat and aid in exchange for support at Tribunal. The mages wondered support for what? Feargus was going to see what books their scribe had copied during the last 4 seasons.

It was decided that Eckhart would remain in Galloway to watch the covenant and prepare for his journey to the distant east and the Ironwood in search for answers about the sword obtained for Regulas ex Tytalus. He was also having the scribe copy Regulas journal to take with him as a guide (this will take the summer season). As support the magi would bring Anne the Steward, Visnya, Hamish, Seamish, Sweet Gille and Garrett. They also brought Galera the “former” Redcap to stand trial for murdering Rufus ex Mercere and possibly consorting with something evil to regain her lost use of magic. Marcus used the faerie “wedding” ring taken from the finger of baby Tomas to put the Prisoner to sleep.

The session ended after the four magi arrived at the Tribunal Site, and participated in the opening ceremony the next day. They seemed to enjoy checking out the magical items. The Tribunal meeting was held in the old ring fort built by Parlix in her war to conquer the British Isles. 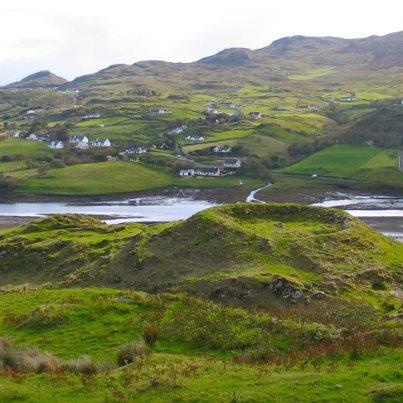 The next day the topics for discussion will be announced. This is when all of the members of the Tribunal bring forth their proclamations, legal complaints, and issues to be resolved by the Tribunal. 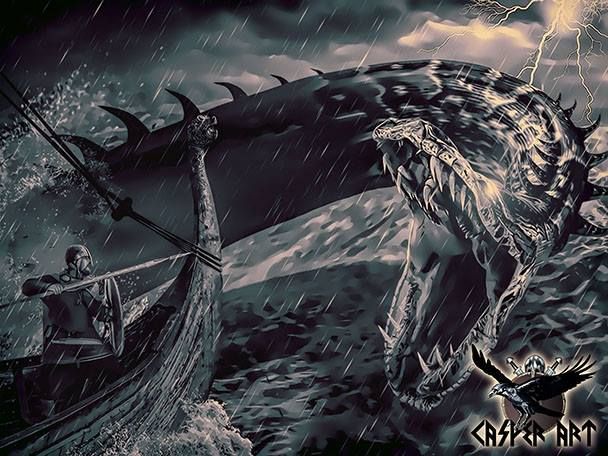 After serving the Covenant faithfully for several years, the Magi decide that it is time they help Bjorn Killsgarrd Captain of the Seebjorn with his curse of Lycanthropy. Sailing out of the Covenant’s less conspiguous port on Loch Mull …. 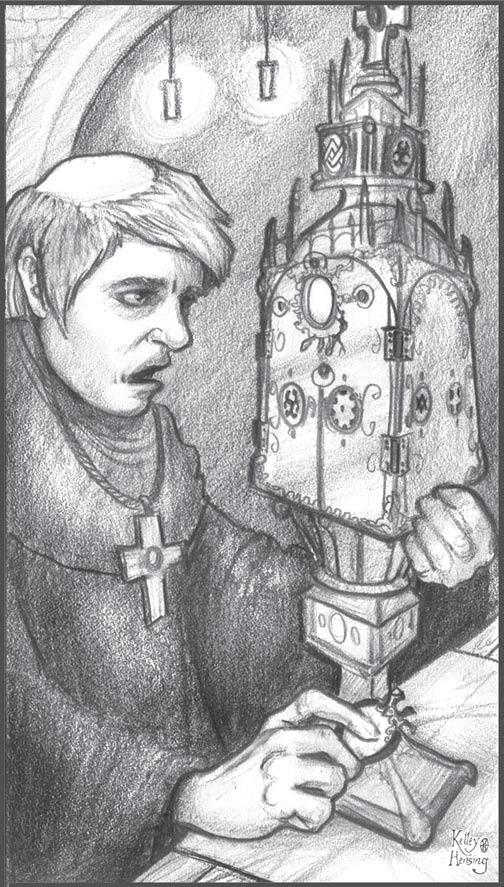 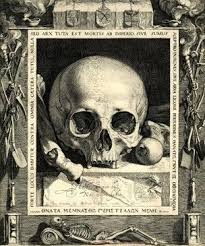 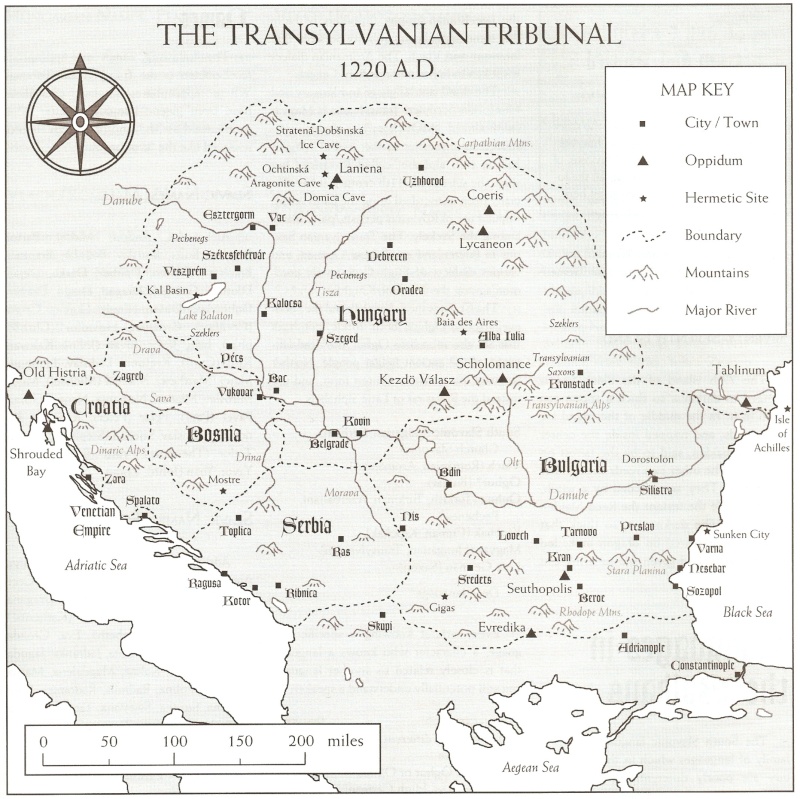 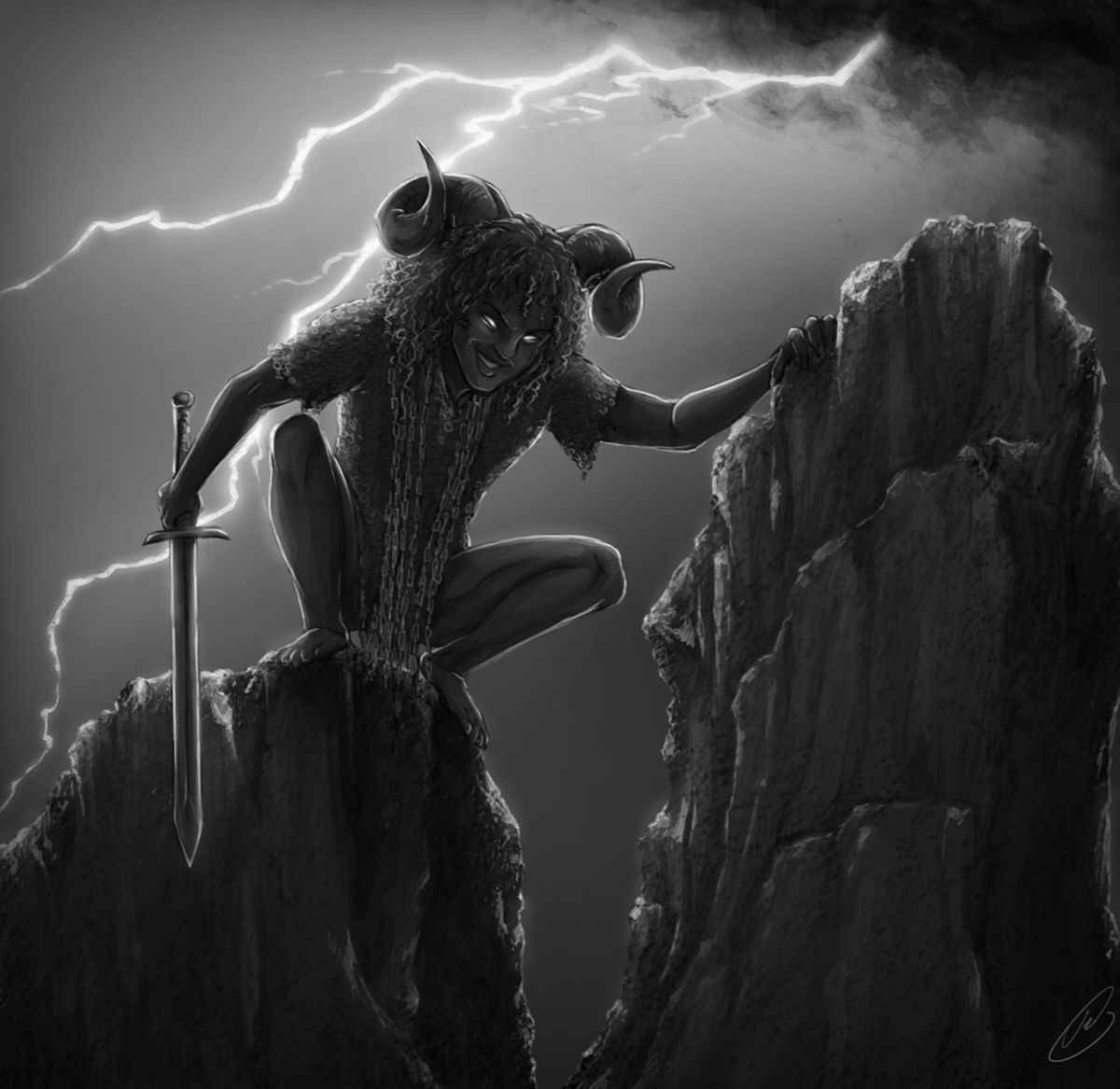 The Champions Portion – this story involves a magical journey to Ireland in the midst of political unrest, hermetic intrigue and legendary heroes to obtain a great source of vis. 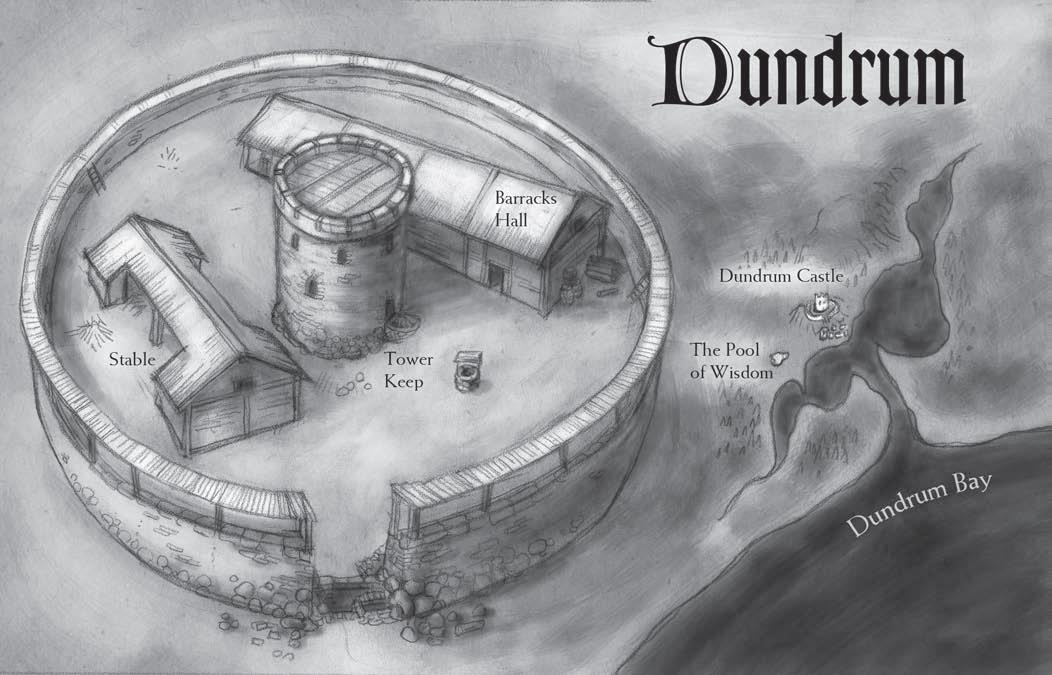 After traveling back to Ireland with Aedh O’Connor and meeting with his fian, the party went in search of the portal stones and the access to the magic sources the witch spoke of. The magi present are Feargus, Sealgir and Marcus. After using the rune stones found in the construction rubble, the party opened a portal into the Faerie Realm, and into another time. the party found themselves before the gates of Bricui’s Hostel at Dun Rudraige, which happens to be on the same site as the current fort Dundrum Castle, which is currently being fortfiied by the English and their allies against a likely attack of the Irish Norman Lord Hugh deLacy and his Irish allies. 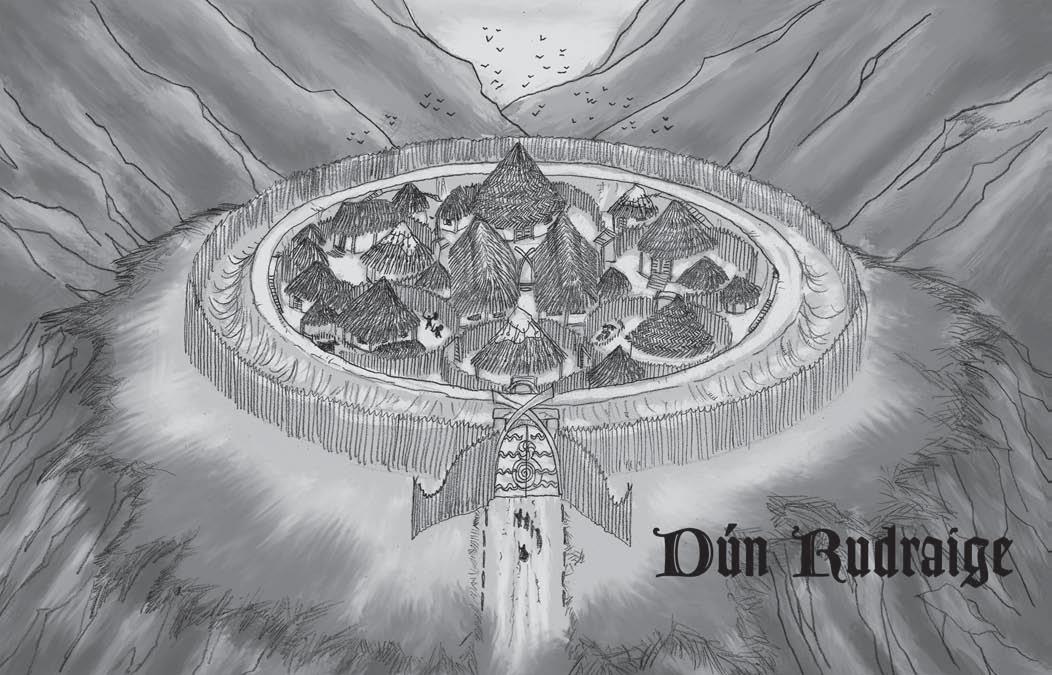 Dun_Rudraige.jpg]]Inside they found the trickster faerie host Bricui challenging the famed Heroes of Ulsters, beings of legend, to determine who is the greatest among them. This kept them fighting among themselves. It also meant that each challenger who won received a silver armband worth 1 pawn of terram vis and so did the judge. The magi decided to compete among the heroes. With Feargus winning most like one of the giant Heroes.

They also learned that someone was killing off the servants of the Heroes. It was most likely the Flambeau who had been following them trying to get into the regio.

After Fergus (who had won every contest against the Heroes of Ulster with some crazy over the top tricks) chickened out in the face of the Giant Uath’s ax. However, Selgir the Bjornaer (who may be leaving the covenant to study in the forest nearby) decided that if the final contest required that he put his head on the chopping block, he would was brave enough to do it. None of the Heroes from Ulster or any of the members of the PC’s party were that brave. (Spoiler alert: the giant let the mage cut his head off. But then he returned the next morning to swing his ax at the mage’s heard but reversed his ax blade so that it didn’t cut the Bjornaer’s neck). The last story “The Champion’s Portion” finished unexpectedly. Congratulations to Selgir and his player Adam S, for putting it all out there.

The final results where 3 gold arm bands with 1 pawn of teram vis each for Fergus, 1 gold arm band for Selgir of teram vis and the Champions Portion, a hind of beef that contains 15 pawns of animal vis! Every Mage got 10 xp and Sealgir got an extra confidence point.

GM NOTE: Remember there are basically different kinds of vis. Generally, raw vis is magical power given physical shape. Raw vis is the manifestation, or some would say the residue, of pure magic. As the stuff of magic, Raw Vis can be used in powerful ritual spells and allows magi to do magical feats that would otherwise be impossible. Magi treasure and trade raw vis much like mundanes do gold. Then there are some exceptional forms of raw vis.
Lesser Enchantment Vis – is a rare variety of raw vis acts like a naturally-occurring lesser enchanted device.
Spell-like Vis – This exceptional raw vis can be expended to create a magical effect similar to a formulaic or ritual spell.
Dedicated Vis – is especially useful for one type of activity, either casting spells, studying in the laboratory, or enchanting items. An InVim Lv5 Spell can tell you the nature of vis and whether it is exceptional vis. IF the vis source is legendary chances are it is exceptional. Exceptional vis can be used once to create some kind of magical effect. This is how many hedge wizards use magic – by using vis like a one time magic item.

The Mound of Crom Dubh – 8 xp for Marcus and Feargus. 4 xp for Sealgir.

We made some adjustments to the story to better integrate it into the setting. I think it made it more concrete. For example, the Abbey visited was Melrose Abbey. (an interesting fact is that King Arthur is supposedly buried in the Eildon Hills, which overlook the village). The two feuding families were the more established Hume and The Scott. These borderland clan chiefs act as feudal nobles. The party did more research in the church archives of the abbey and interviewed Father Lachlann in more detail. Once they had enough information, they journeyed to the mound with the aid of The Hume’s son Thomas.

Once they found they mound using second sight they entered an opened cave entrance and journeyed through four different regios. Each one presented a different level of danger.

On the first level, there was nothing but a straight path that was clearly aligned with the son on St. Brigid’s day. This was the day the Mage Crispin ventured to the mound. On the second level, they found some of Crispin’s grogs dead. Around them more revenant bodies. Marcus attempted to summon the ghost of one of the grogs but made a rare botch and summoned a demon that possessed one of the corpses. It was a fearful start to their explorations. Demon’s Eternal Oblivion exercised the revenant and they learned more from the grog’s ghost. Each level could be passed through either by a sacrifice or by use of second sight.

On the third region, they encountered a carnal pit for blood sacrifices and a three headed vulture demon. It was fearsome, but it botched its effort to instill fear, and the overconfident Gille killed it with one bow shot. On the fourth level, they found gold and jewel offerings but left them undisturbed. Finding Crispin’s body the party retreated through the regios, and Fergus brought the stone ceiling of each passageway down behind them. Once outside they observed Hume and Scott horsemen skirmishing. However, the Hume were victorious and they took Thomas Hume with them and allowed the magi to leave un molested satisfied that there should be no more new revenants walking the bog between them and the Scotts.